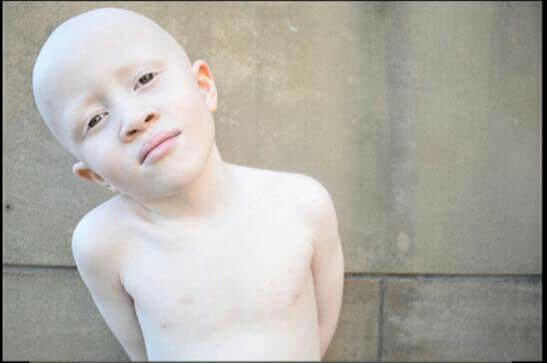 It all starts with an inquisitive child, eyes wide open, head tilted forward, right on the edge of the frame. The problem with children – or at least mine own biggest problem with them – is that they always ask the difficult questions. It is no surprise that in some of our cultures children are usually discouraged, sometimes violently, from asking too many questions. It is even worse, I found out on Wednesday evening at Blend Restaurant & Bar, when the question is a silent one. A stare.

That is, when one is tasked with interpreting a child’s silent stare. Which is exactly what Mo Matli’s lens burdened us with at her maiden exhibition “Intrinsic Melanin” for Bloem First Fridays. The photograph of the boy is one of many adorning the Blend’s meshed wall. The boy with the menacing poser is staring down at us as we ask Rashid Vries, the main model of this exhibition, if as a person living with albinism he feels black, or black “enough”.

What is blackness vele? And what are the degrees to blackness – how much of it is enough? Is it the melanin perhaps? I choose to go with the photographer on this last one; ‘Intrinsic Melanin’. Blackness is not just – to correct Biko’s formulation – a question of pigmentation. It is intrinsic in the centuries of dispossession (of land, labour and sense of being) that mark us all. No amount of pigmentation variations – be it natural as in the case of albinism or cosmetic as in bleaching – can alleviate blackness. Try as you might! (And I secretly root for those who try; who wouldn’t wanna escape?). I hear the boy whisper Fanon’s sagacious words to my ears; “I am over-determined from without. I am a slave not of the ‘idea’ that others have of me but of my own appearance.” Kids and their bloody questions!

I panic; can we move past the albinism of Rashid? Is he not a beautiful man – of course he is! That is the reason Mo shot him. Did he not just say he’s an engineering student? How did he manage to make the transition to being a model? And would he be doing more of this modelling thing? Can. We. Just. Not. Make. Him. A. Slave. Of. His. Appearance? We all know what that is like – it is our collective pain. We enter and nervousness engulfs the room. We attract security escorts in shops. We don’t get served in restaurants. Then why do we do it to him! But alas, we were enslaved by his appearance – do albinos make albino babies? The boy in the top right corner of the wire mesh quizzically, even whimsically, asks a question that would’ve saved us four centuries of msunery had we knew the power to pose the question when the three ships docked at the cape; ‘aninyi perhaps?’

A question Ayanda Mabulu asks of white patrons of the #Amandla![Re]form,Debate,[Re]dress? exhibition catalogue book launch at the Oliewenhuis Art Museum the very next evening. The exhibition has been running from December last year, and it is one of the few that is decidedly black – in both the artists and the subject matter. Also curated by a black woman – another “milestone” in the museum’s history. Laughable really, the whole thing, were it not so painful. And indeed the artwork was painful. On opening night in December I thanked my imposed masculinity for not breaking down in tears when I confronted Reatile Moalusi’s photograph – titled #FMF III – of protesting students holding a placard with the words “police we are your children”. I was, in the words of Ayanda, paining. And this pain permeated through most of the artwork on display. This was, after all, ‘resistance art’. On the Thursday however, as I walked up to the Museum, I was joyously singing Makeba’s version of ‘Bahlelibonke etironkweni’. I was dancing even. Not one iota of my being told me there was something intrinsically wrong about finding joy in a song – a lamentation really – about black people (someone’s parent, child, lover) languishing in jail for daring to be. Enter Ayanda! I got to the museum and like a dog wishing to mark territory headed straight to the loo. The song still ringing in my head. I went straight for Moalusi’s photograph afterwards – it elicited fokol in me. I moved right along. All the artworks were quite. Boring even. So I gave them all a cursory look just to maintain my lie as a cultured person (we are responsible for the upkeep of our lies). One oil painting did manage to insult me though; Martin Steyn’s ‘Die land is ons land.’ A white man laying languorously on a large expanse of land. But only enough for a ‘Nxa!’ I went and took a seat and waited for the show – for that’s what it was, pre-Ayanda, a show – to get started. Sooner it ends, sooner I can check-in and say something banal like “what a lit time we had at Oliewenhuis” and live another day known as the patron of the arts. But Ayanda wasn’t about that life. When asked to introduce himself, after the flurry of self-congratulatory speeches from those involved for doing something so “radical” and other artists had literally just stood at the podium and said “Hi my name is….” and left, Ayanda recited ithakazelo zakhe. At their tale end he excused the ‘unsophisticated juvenile tongues’ of our paler counterparts and gave them a pass to just call him Ayanda. It got uncomfortable; but the kind of discomfort that makes things ‘lit’, that will have us tweet ‘bars!’, but threatens very little. He too must have noticed he was playing into the masochism (we seem to enjoy performing our pain) of the zeitgeist; a candidate for a meme. He went further. “We are not entertainers…we are not going to dance for you.” Some uncomfortable laughter could be discerned. Loso logolo ditshego akere? But how long will we hide behind laughter? He goes deeper. “You are worthy to be protested.” He tells the 1652s. We are now lodged in Fanon’s black abyss. There is no way we could laugh our way out of this one. Someone attempts to clap him off the podium. “Wait I am not done!” He must have heard IceBound on how applause kills. “This is not art…this is our pain!” He stands in front of Asanda Kupa’s “Situation right now.” A painting that painfully reminds one of the haunting line “the children are flying, bullets are dying” in Makeba’s ‘Soweto Blues’.

When all was said and done, all that could be done the Sunday after the Saturday was braai meat, recount our failures and plan for more so that we can fail better next time, all because #ArtLivesHere. 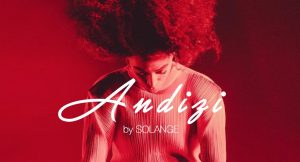 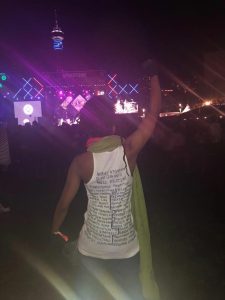 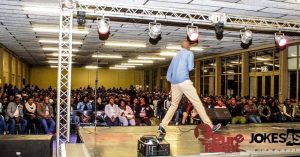