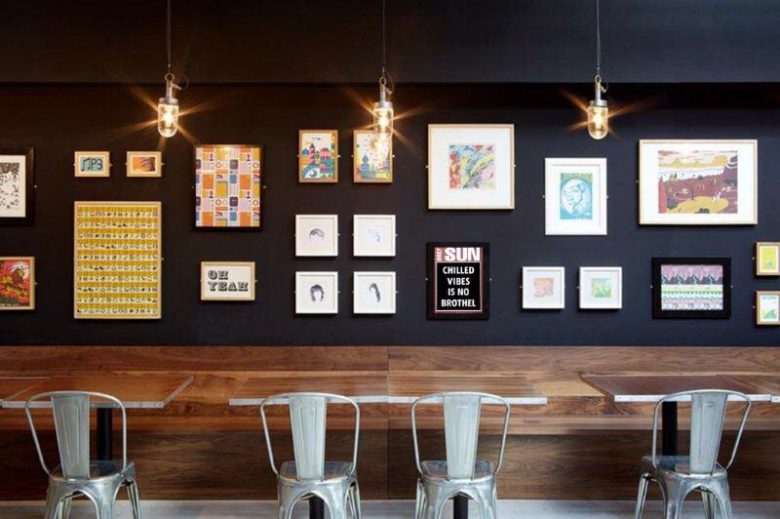 “Why we even here?” She asked callously as the applause died down. The guitar rested on her lap looked a bit oversized for her body. In fact one could not be chided for mistaking the whole affair for an amusing child’s tomfoolery with an adult’s instrument. She fixed her gaze on the audience as she asked the question, but her eyes were so wide and blank that she looked surprised at their uncomfortable laughter and disinterested at the same time. Was it a trick question? An existential question? Or simply a question?

The latter caused the most discomfort; we are supposed to be deep. We can’t afford simple questions. They must be layered with meaning. They must be underpinned in some misunderstood or misappropriated theory. Questions ought to be subversive. They ought to be catalysts for the next revolution. In fact; they ought to be answers. Those in the know we don’t ponder when a question is asked; we nod in agreement. With a smile. To illustrate that we have an understanding with the poser the others may find puzzling. If we do say something, whether immediately or a minute later in a tweet or a day later in a blog or a month later in a newspaper column – we ask the question. That is, we question the question. Only idiots answer questions. We ask the ask.

“To chill!” Amongst us there seemingly was such an idiot. She seemed happy with the answer and strummed along on her guitar continuing with the song she opened her set with. She’s not one of us people. She’s her own people. Nothing said this louder than accepting such a simple answer to her layered question, thereby rendering it banal.

“Could it be I’m suffering?
Because I’ll never give in
I’m falling love
Tell me I don’t see myself good enough for something else.
Just don’t say I’m falling in love”

She seemed to be experimenting with the melody as she emphasized these lines. “I’m falling in love” was sung with much strain and pain evident in her face. She seemed to be caving into herself as she sang these lines. The guitar however seemed to be independent of her suffering, only joyous melodies escaped the sound hole. The audience was enthralled and conflicted. A conflict akin to Dana’s happy-clappy Ilolowho’s searching for her name.

She abruptly killed the guitar with a sharp lingering c’ note. “Couldn’t we blame something else though?” She asked with derisive laughter. The conflict in the audience started to make a bit of sense to the discerning eye of he who conjures up fictitious situations, pretends to be the only sober one present thereby granting him unrivalled rights to tell the tale. Corinne Bailey Ray sang the song, probably, for a particular beau. She however seemed to be singing it for the audience. She seemed to be vehemently rejecting falling in love with them, and even the very club she had invited them to its opening.

Earlier in the year I had written that she is “emotionally draining and abusive” following her first solo show. It just so happened that we were going through a rough patch in our amorous relationship at the time; so my words were read out of context. Here she is again vindicating my words. Basically telling her audience, her fans, that she dreads the thought of loving them. That loving them is something beneath her. “Tell me I don’t see myself good enough for something else.” The suffering in her voice coupled with the buoyancy of her guitar put the listener in a dilemma as to whether to cry or smile. And before one could decide one way or the other, she cuts it all off and laughs. I smiled – she had them eating out the palm her hand, my gamine.The audience took a minute to react. Again with uncomfortable laughter. Sprinkled with some tentative clapping, finger-snapping and some indiscernible murmurings.”It best not be love!” She shouted and strummed a sad melody. They kept quiet and listened.

“I’m no geisha baby” she said over and over again over the melody. Each time she said it in a different accent. She seemed to be toying with the accents to find the perfect one for the melody. She stuck on a Brendaesque childlike accent. She played around with it for a while with mounting glee. ‘Twas progressively moving from a chant to melody. A playful one at that. Which progressively gained familiarity. Its motif was definitely Brenda’s “Weekend Special”. “I’m no entertainer.” The crowd was swaying side to side with wide smiles. Even though she denied them, they loved her. “Ga ke a abelwa ope,” she rallied against her birth-name.

“I’m the Delirious Encryption!” She strummed hard as she rapped, “Drive ya crazy without exception / understanding me is akin to Malinga prescribing medicine/ on a mission to invoke some verbal lynching / here to confuse not converse with you / I will sever ya head way before I serve you/ unless…unless…unless..”…the strumming turned soft again with her voice, no longer childlike but it took on a sombre posture.

“…Unless if I’m no (your?) geisha baby” she sang softly and sadly. Much like the Brenda classic, one couldn’t tell if she was saying ‘no’ or ‘your’. She was disavowing and avowing her geishaness at the same time. “I’m no/your geisha baby” the audience joined in slowly. Each person of their own accord choosing whether they were or weren’t geishas.

What is to be said, the deep ones pondered, of a singer who at the opening of her club declares such? “She is reclaiming her right as an artist,” one of us quipped in a tweet, “as opposed to a mere entertainer.”

Another tutored on Tumblr: “Geisha are descendants of the saburoko; who were basically prostitutes. Although the geisha were themselves not necessarily offering actual sexual services, sexuality and seduction were their motif. Much like female musicians of this day. Whose entire arsenal comprises of dances, costumes, make-up and sounds entirely committed to arousing the male sexual desire. Much like the geisha. She rejects this in totality. We must salute this brave move.”

The entertainment columnist concurred: “The Gamine, as Delirious Encryption is popularly known, set the bar high at the opening of her bar lounge Chilled Vibes this past Sunday, positioning it as a place of art and not just ‘mere entertainment’. Speaking to The Weekly after her performance, she promised that Chilled Vibes will host listening sessions for popular and unknown artists, both local and international. ‘Here music will reign supreme,’ she said ‘not noise. Music.’”

Not to be outdone, the art critic mused on Facebook, “The Gamine did something spectacular today. Her fusion of Brenda Fassie and Lauryn Hill on the “I’m no geisha” song was nothing short of genius – a collabo made in heaven. In her hour-long solo performance she gave tribute to a range of female artists: Corinne Bailey Ray, Nina Simone, Emeli Sande, Erykah Badu, Floetry, Joss Stone etc. She did this all in song, often infusing one diva’s words with the other’s melody. Weaving this perfectly with her own tunes. Not once did she namedrop. A seamless performance that took the audience on an emotional journey, mix and matching different voices, genres and styles. She is a true artiste. And if this is what Chilled Vibes promises going forward – true art, may its lights never go off!”

However, the tabloids had the last, loudest and far reaching word on Monday morning when they declared: “CHILLED VIBES IS NO BROTHEL.”

In her endeavour to favour the banal over the deep; she retweeted, shared, pinned and pressed only this headline. Much like she did on Sunday by accepting the simplistic “to chill” answer to her ‘existential’ question, she again shunned the ‘deep’, or ‘those people’ as she calls them, by totally ignoring their appraisals. Notwithstanding that they were among her most loyal fans, and she was seen as their most popular icon. Her disinterest in them fuelled their love for her. It was something they had to explain, define and catalogue. Hence they came to each show, downloaded each track, and read every blog. She felt that they had lost all senses except their sense of self-importance. “They have too many words” she opined once, “and boxes. They have lost the joy of discovery. Everything is known before they actually experience it. When they do experience, this experience is pitted against their knowledge. Killing it with their words and boxes. I don’t want to be one of those people. The sad thing is that they’re not pretentious at all; it’s just the way they are.”

The poster was her profile picture on all the social networks; she even framed it and put it up in the lounge. In a radio interview later that Monday night when the presenter asked her about the trending headline she quipped, “It should be. It really should.”

The People Shall Smell