I Fear My Peers

Actually this intolerance is mostly found amongst the young educated ‘middle class’. Contrary to popular belief, it would seem as if education narrows one’s thinking. In our black communities, we have all sorts of beliefs and faiths. Even within the large faith, Christianity, there are stark differences. For instance you have (what I think is the main divide) the Eurocentric Christianity (aptly called Dikereke tsa Molao) and the Afrocentric Christianity (aptly called Dikereke tsa Moya). Lately, with the introduction of the charismatic churches; you have a divide between the traditional churches (both Euro- & Afro-centric) and the new age churches. In time this could be the main divide, but the lines are a bit blurry for now.

Let us now audit the differences between and within Dikereke tsa Moya and tsa Molao. The main distinction between them is that the latter are local branches of the European churches and owe their theological and ritual allegiance to their European metropoles. It is no coincidence that some are referred to by their European origins (“Roma” for the Roman Catholic Church and “Fora” for the Reformed Church of France) or the European founders (“Wesele” for John Wesley and “Lutere” for Mark Luther). Dikereke tsa Moya on the other hand are the indigenous (indigenised?) churches founded through rejection of the missionaries’ suppressing of the African cultural expressions. This movement found concrete expression in Isaiah Shembe, Engenas Lekganyane and Christina Nku in the early twentieth century. These churches infused African expressions, rituals and knowledge systems into the Christian faith – something which, if one studies Christianity carefully, is not unheard of. In fact, this is very consistent with the Christian tradition. When the faith was first introduced to the Romans and Greeks it had to undergo indigenisation; and well-known results of this process are the Easter and Christmas rituals. The English went as far as to alter the bible three times (King Henry’s “Great Bible” of 1535, the “Bishops’ Bible” of 1568 and the 1611 King James’ Bible). We also have the Russian and Ethiopian Orthodox churches that indigenised the faith to suite their cultural idiosyncrasies.

Dikereke tsa Molao in the majority reject apriori all African peculiarities such as bongaka & ditlhare as evil or at best something to be shunned upon. Dikereke tsa Moya on the other hand have a more positive view on these to the extent of even inculcating these as key components of the church. However even intra-church there are antagonistic views on these issues. Still, they hold together and no one is thrown to the imaginary hell guillotine.

Within Dikereke tsa Molao there are (theological and ritual) differences and feuds. There are at a supra (but methinks inconsequential) level inherited feuds from the metropoles; e.g. the Anglican/Protestant vs Roman Catholic theological feud. This for me I find inconsequential mainly because the average church member does not know the theological underpinnings of their church, never mind how it differs from that of other churches. In most cases we inherit a church or choose one as you choose Pepsi over Coke, that is, superficially. The other differences are with regards to marriage, the role of women, etc. The differences that seem to matter most, because these are subject to opinion as opposed to law (role of women) and authority (theology), are the ritualistic. One of these is the church dress-code and uniform (mostly affecting women). Some churches are more puritanical than others, which invites judgements of morality/decency – a thorny issue that causes little storms in teacups. Another ritual difference is the singing and dancing. Some of the churches adopt the hymns (albeit translated) of the mother churches as is, with all their dull monotonous arrangement, and only sing those. Whereas other sing a variety of hymns from different songbooks and even popular artists, and do allow some jiggle and body shake.

The differences in Dikereke tsa Moya reveal themselves in the myriad of splits that have occurred in the churches both big and small. For instance Lekganyane’s Zion Christian Church has two headquarters and Nku’s St Johns Apostolic Church has three (if not more). My personal experience in Nku’s church is riddled with splits – I have experienced four splits in my young life; some amicable some acrimonious, each more traumatic than the other. The power struggles that lead to splits in the Zionist and Apostolic churches have become commonplace, more so at grass root level. And with this ill-feelings are generated between former church fellows. Another matter that breeds bad blood is the role of ancestors and traditional healing within the church. The hard line some take on the matter might be at the root of the secret societies within churches (Dikereke tsa Sephiri); where the faction that lost out on the question will gather in secret to practice their belief.

Before I move from the intra-Christian differences; maybe I should explain the terms “Dikereke tsa Molao” and “Dikereke tsa Moya”. Dikereke tsa Molao are so-called, in my opinion, for two reasons. Firstly, they are very much grounded in church law (usually as it is handed down from the metropole) in everything they do. Whether it be the appointment of church officials, acceptance of new members, excommunications and even how the services are run. There are boxes to be ticked at every turn. Contrast this to Dikereke tsa Moya, where ‘the spirit’ (and whoever is holier) reigns supreme. These are run in the most in a sort of a feudal system with an overbearing power figure who appoints and expels. This power figure is not necessarily the head of the church nor is it one person – there are cabals and factions who fight for power and influence. (By way of side note; this is not to say that in Dikereke tsa Molao there are no powerful figures/factions; the main difference is that if an individual feels hard done by, there is recourse in the law). Whereas for example the Roman Catholic service is guided by a coded regulation in which everything is in place and follows a set sequence and one can be assured that the service will run for this much time, you will find that in a St John’s Apostolic service, though there is a standard procedure, it is subject to the dictates of the spirit. If the spirit demands that a certain five verse song be repeated 10 times, with 5 humming sessions to boot – so shall it be. If the spirit propels a certain elderly woman who was not on the program to get off her chair and testify or scold the youth of today – so shall it be. The spirit guides!

Secondly, Dikereke tsa Molao were afforded a legal status by the state, whereas Dikereke tsa Moya were denied. This means that if you were a member of the ZCC and you were filling some legal form (job/school application) that required to know your denomination; you would have to pick one of the legal churches you find closest to your ZCC.

Now, outside of the Christian fold you have your people who believe in ancestors and practice this belief to its fullest. You have your Rastafarians who smoke their weed and have long brown (dirty?) dreaded locks. Also there are the Muslims with their long robes and abundant beards. Then you have your full blown heathens (mostly men) who don’t recognise any deity and live in their bottles, sports and betting.

Yet we have managed to live together as one. Of course we can successfully argue that apartheid lumping us together left us no choice (of course we ignore the fact that were it not for apartheid none of these differences would exist). But it is not apartheid that forces a respected member of the Catholic Church to attend her Sangoma neighbour’s Mpho ya Badimo. The motif that has always been prominent is one that says before anything else re batho. That is why in spite of the very mutually exclusive beliefs we hold; we have not descended into religious anarchy.

But it is my fear that this motif is slowly dying out as Christianity is becoming:

This dangerous process is supported mostly students and the educated middle class. One must appreciate how dangerous this group is, in and of itself. Because it is educated and has upward social mobility, it believes that it has all the right answers, and due to the power it wields its answers are always accepted as the right ones. This inevitably leads it to non-thinking. And because of this non-thinking; any question/opposition to its hegemony is treated harshly. These are young people in the late teens to mid-twenties. As life is linear, these are the people who will occupy positions of power in the near future.

This group belongs to the type of (individualised, commodified and defensive) Christianity I mentioned above; most of whom belong to the new age charismatic churches (great networking places these ones!). I find this group, my generation, to be extremely religious, conservative, fundamentalist and intolerant. In short; fascist. They are quick to draw the us vs them line. Now imagine this non-thinking group with power over life and death, whose God promises that He “will make the nations your inheritance, the ends of the earth your possession” [Psalm 2:8] and “shall bring you into the land, you shall cast out many nations before you, nations much greater and mightier than you are. You shall smite them and utterly destroy them and make no covenant with them and show no mercy to them.” [Deuteronomy 7:1].

My god! I am shaking in fear. Kill me now! 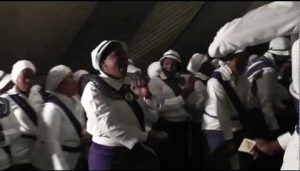