There is no possibility for a relationship between ex-lovers post the love affair. The popular retort “we can be friends” is primarily a false invitation. The events leading up to the break-up are essentially traumatic. On the off-chance that this is not the case; the break-up itself is a traumatic experience. Once this is done. Once one or both parties have been hurt. Things can never be the same. Never. One if not both parties will be paralysed. The fear of hurting one’s lover again is paralysing. The fear of being hurt by your lover is as much paralysing. Which renders the post break-up relationship a nervous condition. Don’t say too much. Don’t open up too much. Don’t get too close. Don’t linger too long on the hug. Don’t flirt too much. Whatever you do; don’t take it too far. In short: O s’ka phapha!

Is this not the same nervous condition that governs the black’s relationship with the world. “Yes you were wronged, askies, grab a few equity shares. What? Land? O s’ka phapha!”

When blacks relate with the world, they always have to ‘behave’. To act in ways that are not threatening. Recently on my way back from the shop, I entered the street on which my staff quarters are, just after a white man whom I recognised as my next-door neighbour entered the street. It was nine in the evening, there was just the two of us on the dimly lit street. He was walking on the other side of the street, maybe a metre or two ahead of me. Now, the side he was walking was a side I was supposed to cross to, to get to my abode. But then I remembered that I am not his next-door neighbour, I am a robber-murderer-rapist. And I did not want to even dare do anything that he might for a split second deem as threatening. I was thrown into a nervous condition. I even panicked. I kept trying to figure out how to walk over to the other side in a non-threatening manner. Failing which I resorted to slowing down until the gap between us was wide enough. I had to behave.

The love-affair, at its zenith, is characterised by absolute freedom – it is humanity. All the things that one bottles up are let go in the presence of the lover. All the thoughts one is too cautious with in front of others are uttered carelessly in the presence of the lover. All emotions that no one else sees are seen by the lover. The farts. The burps. The stretchmarks. The birthmarks. The tears.

All vulnerability, all stupidity, all insecurity, all insanity, all anxiety, the lover is privy to. The lover is the keeper of secrets. The lover, just like whites, has the power of life and death.

The timid envy, repressed hate, disabling fear, pretentious get along, that the black has towards the world is also to be found between ex-lovers.

We must also note by way of side note (with a little esoteric smile) that the term ‘ex’ finds its phonic sister in the ‘X’ placeholder that 20th century slaves in America deployed in place of their masters surnames. It represents a blurry break with the master. Malcom X described it as an unknown. No longer a slave (that is, property), not really a human, but something in between. Or nowhere. An unknown. A void. A hole. A black!

Is this not precisely what an ex is? The ex is a not-something – as is the black. The black is not a slave; for she broke off the chains. Is not a colonised subject; for she attained independence. Is not a kaffir; for she built a rainbow nation. That is what the black is not, but what is the black? Who knows? So Ms Black X takes her empty purse, puts on her turban and hits the streets searching for her name.

We find that the ex is beset with the very same questions. Post the break-up we hear him talk of recovery, of rediscovery, of finding oneself and learning to love and be loved again. That is, to be human. Like the black the ex also tries to go back to the pre-encounter era, to find himself there. However he finds nothing. Everything has been tainted by the encounter. There is simply no him before the relationship. Soon, in tandem with the black, he realises that he can only forge ahead and create himself (the world) anew. He discovers the indelibility of the relationship/break-up mark. It’s never going away; no amount of time will heal that wound.

Since the hands of time cannot be turned and since a new world is yet to be created – he has no option but to confront life with his ex-lover. As did former-slaves with born-again enslavers, former-colonised with neo-colonialists and former-kaffirs with rainbow-cheeked baases.

We note above that it is only the blacks who fancy that things have changed, but the world merely continues unabated (notwithstanding a few cosmetic changes). That the black considers herself free has no real effect on the world. The black asks the Zizekian question: “Of course I know I’m not a kernel of grain but a person, but does the chicken know?” Similarly the ex commissions Gregory Porter’s painful question “does she know what she does when she dances around my cage and says her name?”

This post-breakup relationship finds anecdotal bearings in the relationship of not-slaves not-colonised not-kaffirs blacks and the world. Blacks are in a precarious situation where they ought to be careful not to threaten social cohesion with their demands for justice. Is the good ex not the one that never brings up how hurt he is? Is he not the one that moved on? It is this ex that will get a friendship, this one that is not bitter is the one who’ll be remembered as a good experience. Such a good guy! He might even get a ‪#‎TBT‬ tag once in a while. We also find this good black – she’s an independent non-executive director somewhere, a spokesperson of some NGO, a student leader, even a president of a country. This is the black who refers to colonialists as founding fathers, who calls imperialists ‘industrialists’.

In a desperate bid to not be seen as bitter, both the black and the ex hide their pain and fully submit themselves to the O s’ka phapha! ideology. To fill up their voids with empty gestures of friendship and reconciliation, they behave. Yet they know fully well the impossibility of it all – but one has to keep the peace. O s’ka phapha! 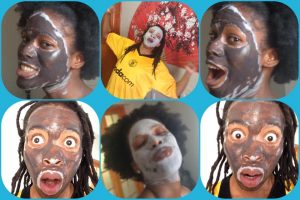