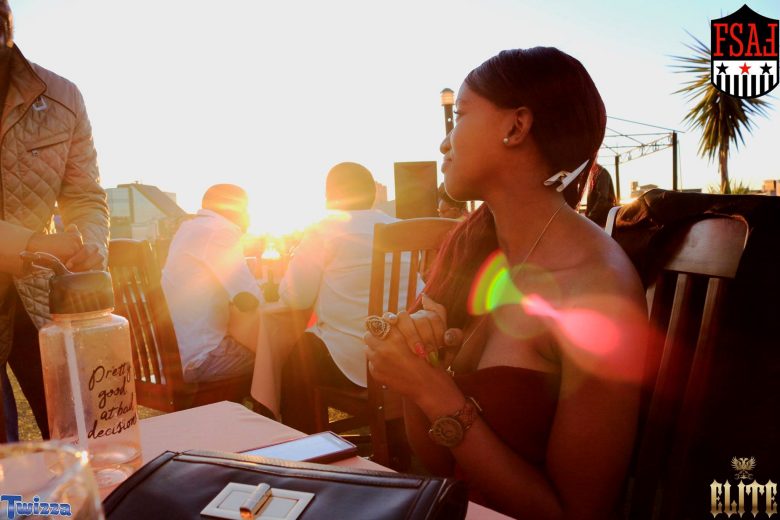 It’s a chilly night. He knew it’d be chilly even though it is still February, and he told her as much. But none of the jackets matched with her outfit, decided on weeks ago, so she dared not interfere with decisions made early and sober. So she ignored his warnings. It was summer. She was in love. The stars were out. She had to shine – it was fate. So she paid him no mind – “don’t worry sweetie.”

Stupid! He castigated himself as he reluctantly let go of his jacket soon as they reached the rooftop sprinkled with chattering human bodies. Stupid! He knew he had all the reasons to worry. But still somehow did not bring an extra jacket for the eventuality of her getting cold and forgetting about her outfit. Now he’d have to suffer through the chilly February night. Stupid!

The big screen showed faded (the sun was yet to die) black and white images of black young bodies in some form of protest – or dance. Same thing really. The speakers blared “Pasopa! Pasopa!” He chuckled thinking of his earlier warnings that he himself did not heed. The voice was familiar – definitely HHP, the signature hook gave the genius away – but not the song. He panicked a little when he could not whip out his phone from any of his pockets – ‘I hope this isn’t one of those places crawling with pickpocketers.’

But all that was disturbed when he remembered that he sneaked the phone in the inside pocket of the jacket now covering his bae’s no longer shivering torso. He slipped in his hand surreptitiously almost as if copping a feel; eliciting a light slap from his paramour before she realised his only interest was the phone. The phone – why was he in such a hurry to save it from her? She wondered innocently. Shazam. That’s why he reached for the phone. To Shazam the song – the pleasantly old school Motswako jam – playing on the speakers. Pasopa! Shazam informed, with a link to purchase the song to boot. Later, he thought.

The bar was just across the entrance. No question he’d go for an unmitigated spirit. Vodka! He thought. All the Russian novels he read people were always drinking vodka. And Russia was the coldest place in his imagination. It therefore stood to reason that vodka would serve him well in this cold. His partner was embroiled in animated conversations with people he didn’t care to recognise.

He lipped his intention to visit the bar; she flashed a disinterested but approving smile. He left. Came back empty handed. This is not the place where they pickpocket. His wallet was in the other inside pocket of the expropriated jacket. He tapped her on the shoulder. She tilted her head backwards to attend to him without leaving her conversation with her people. He whispered unsweet something in her ear. She retrieved the wallet and handed it over like change in the taxi. He left.

The barlady had already poured the double of neat vodka. It still looked too little – especially when pitted against the jugs in the Russian novels. He halved it in one go. It rushed through his body like a cape flats fire. And was just as devastating. He paid his bill – for the vodka and bottle of water, the only thing he knew the jacket thieving lover would not oppose. He handed it to her like one passes a taxi fare.

In the far corner there was a group laughing hysterical in between trying to finish a verse of ‘Iyhoo Solomon’. My people! He thought and headed to that direction without leave. The game was clear to him soon as he arrived; they start in all earnest to chant the struggle song, in formation and all, then as soon as the first bars are down, they take a sip of their drinks and reminisce on the “iyhoo’s” of their comrades who got goed gedonnered singing that song – which inevitably leads to laughter. Coz, as we all know, loso logolo ditshego.

He didn’t have much chance to join in when the MC took to the stage to welcome “the thespians. The incorrigible critics. And cretins too. Poets, posers and provocateurs. Painters of words and writers of pictures. The emo, the ego, the cold, the misconstrued, recluse, melodramatic, the comedic. Troubadours, dancers, griots, minstrels and raconteurs. Fashionistas. Modern and pre-modern who dare don their grandma’s bloomers. Colour blockers and Goths. And the two tone earthly colours enthusiasts. Weaves, dreads and Afro’s. Mohawks, fades and fringes. Doeks, straight caps, bucket hats. Cis trans homonormative polyamorous non-identifiers. Liberals, hoteps, radicals, feminists, Christians, conformists, against-everythingists and those with the label ‘no label’. Fuckboys, febenazis, celibate monks, zoners and zonees of all hues, prudes and perverts.”

The sun had gone down, only a dying orange ember hang stubbornly to the sky, but it was dark enough to see all that went on the screen. At this stage a stream of messages of support and ‘so sorry I couldn’t make it, #FOMO.’ The MC introduced a poet, the music died and the patrons were taken on a bird watching journey – images of different birds on the screen, the poet praising their majesty in tear-jerking (for its pure beauty) language.

Music played for a good while post the poetry – a Tiny Desk Concert of The Internet. The MC came on the tail end of it, told everyone to take their seat as the ‘bioscope’ was starting. The Solomonists attempted a chant but the MC laughed them off – “it was not yet the time for Kalushi,” he said to their disappointment. That would follow after the short film from South Sudan.

He made a dash for the bar for a refill. Thereafter started searching for the coloniser of jackets. She waved her hand for his attention; she had settled on a two-seater couch and wrapped in a golden throw. He smiled; she always made a plan. He nestled in her embrace and forgot the vodka. All the lights died, except for God’s stubborn sparkling eyes in the sky. He looked up and sighed. Warmth. With her in it, the world is a warm place.