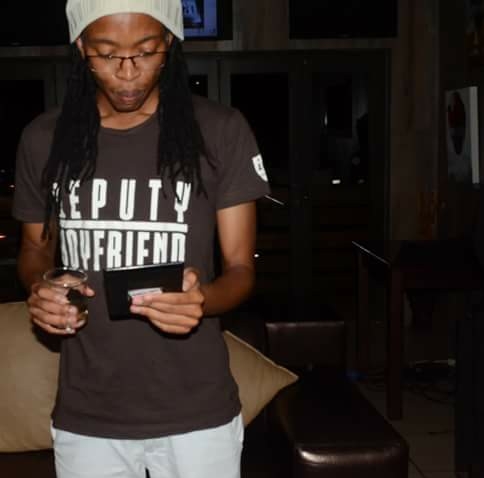 There’s another moment from last night’s reading of “Pope Chronicles: The Ministry of Deputy Boyfriends” that is kind enough to rescue me from washing the dishes, and Moonchild Sanelly’s “Rabulapha!” album guides me here. I have before described her music as kwaito. I will tell you why. I am very much sympathetic to the reading of kwaito as a political project to lull the masses into the rainbow nation crap, especially given that politically conscious hip hop was slowly taking root in the country at the time kwaito came into being. But I often find myself yielding towards the more sympathetic reading of kwaito as a music of a people wishing to drop the burden of struggle for a while and just breath. Even if for a fleeting moment pretend to be human. And this is where I find Moonchild’s music fitting in; in these perilous times of fake deep and pop radicalism (where we are ready to fight 1652s but tremble in fear soon as they “downgrade” THEIR credit rating and rand – we’ve been in junk status since we were blackened). Her music defies genre, in both style and content. When you listen to the album you cannot but feel good; mainly because it sounds like the artists involved had a terrific blast making it. Just like kwaito – it’s an invitation to breath.

Now I think I am somewhat involved in a process not yet defined (and admittedly riddled with intellectual, ideological and ethical pitfalls) which I would now term – with a sympathetic reading as per above – the kwaitofication of literature. That is literature for the sake of it – rather for the fun of it. Rossouw and I have been mulling over this thing for the whole week (check our timelines). I also used this in defense (defense against myself mainly) of my short story anthology Celibacy & Other Cute Little Things a while ago, in which I declared the book to be “a rally against meaning.” By this I was rejecting the burden placed on black writers – and black artists in general – to make a revolution with their art. Or worse still; to explain blacks in some sort of perverted anthropological exercise, almost as if the writer is a safari tour guide for the all-consuming curious white gaze. When I write I do so with the express purpose of ignoring the white gaze – difficult as it is. When I was asked last night, after reiterating that Deputy Boyfriends are necessary because black men are handicapped in loving black women, if I mean to say that white men are capable – I responded by saying I don’t care, those people must just bring back our land.

In decrying this burden on black writers, Thato mentioned that one can’t even write about buying condoms without launching into an exploration on the politics of sex and gender. I must hasten to mention that this burden is as much internally as it is externally exerted. And truth of the matter is that it cannot be avoided. We can’t ignore politics – even when we explicitly try to do so (which in itself is political) – because our very bodies are a site of politics. Our very existence is the battleground on which the war rages. As Frank Wilderson says, we are not ‘beings in the world’ but ‘things of the world.’

But try we do. Moonchild’s “Rabulapha!” is for me the most recent successful attempt at this breathing exercise of kwaito – our very own existential yoga. I don’t think attempts like trap hip hop succeed firstly because they’re part of the colonisation problem (most of our popular music artists are mere caricatures of their American gods) and secondly its absolute crap – lacking in originality and artistic merit. I also, in light of my recent naggings on unburdening ourselves and our art, attempted to make last night’s reading such a yoga session.

Anyone who has read the Pope Chronicles will know that in as much as it is a brilliantly thought-out and written hilarious piece of kak praat, it also has a very clear political project – which in the main is a feminist call to do away with the oppressive sexual/amorous modes of relating and reimagine how we love and fuck anew. It also moonlights (see what I did there?

😉) as political satire. In my reading last night I strayed away from these tenets and concentrated only on the kak praat. And maigot did we have a good laugh!

Now back to the moment that provokes this latest attempt at avoiding washing dishes; at the very end of the hour-twenty-minute long session of kak praat, I recognise a man sitting at the back who wishes to ask a question. This despite my showrunner Morena insisting that we wrap the whole thing up (we had agreed that we should not go over an hour as re sa batle go e latswa bobe – shows in Bloemfontein tend to take a tad bit too long and we did not want to be part of that decadence). So this man is recognised as the last person to ask a question, after I answer him we wrap up. Cool!

He speaks slowly and lowly – we are without a mic. I get closer so that I can hear him clearly. His first sin – he assumes that tutor-pupil attitude I complained about earlier on this here platform. He’s black therefore I’m burdened with loving him so I forgive him. He then admits to yet another sin – he came in late and is not well-versed on what the whole affair is about. This one grates my balls a little but still I remain calm, but inside I so wish that Mbuyiselo or Luyolo were there to tell him “then shut up!” You see, back when I still fancied myself an intellectual I used to attend all manner of public talks, book launches, debates, lectures etc. Before going anywhere I would do a bit of research – read at least one credible book/essay on the topic at hand. If I failed to do this; I’d never even dare raise my hand. The principle is a simple one in revolutionary politics; “no investigation no right to speak.” Or as I like putting it; o balabala jwang o sa bala? It is utter disrespect. But again, blacks are forgiven apriori – so I let him be. He takes exception with me referring to myself, a “black man” (don’t laugh!), as a perpetual juvenile. What grates his balls is this sentence in the Pope Chronicles that I read out loud in response to a question on why black men cannot have a say in whether or not they’re deputised; “Of all black children, aged 0 to over 100 years, the black man is the most childish.” And then he starts quoting a litany of psychological texts and invites the white gaze to the room (the old tired “we can’t say this about ourselves because that’s what they said” argument – Khomo has a beautiful retort to this which I fail to quote verbatim, but basically makes the point that whites have taken everything from us even the right to self-critic, a basic human tenet). At this point I can’t give him any more leeway. The mood is becoming sour; we are skating on the thin ice of go e latswa bobe. So I beg him to hold his thought, which I would engage later after the show, for it doesn’t belong here. Basically his line of thought, albeit one I can entertain at any other time, is like an ANN7 reporter at an EFF presser. He refuses to hold back for proper engagement later and accuses me of suppressing him; the leadership I am will not engage in a back and forth “no I don’t – you do too” childish game so I own up to suppressing him and move right along with wrapping up the show (btw he wasn’t the only person I suppressed, I had suppressed the guy who wanted to go in too deep in his critique of the Roman Catholic church for the same reason that this was no platform to do so, and I had gratuitously gagged Sisipho all night as a fascist example of my power).

To add more to his sins – someone later describes his refusal for proper engagement as an act of masturbating on the floor; he just wanted to feel good about saying something without being subjected to scrutiny. Had he at least read the flyer handed out at the reading; he would’ve surely come across the words “quirky”, “irreverent” and “tongue in cheek”. Had he listened to the engagements – where people accused the Roman Catholic church of falsehoods and even moved that God was Joseph’s Deputy Boyfriend – he’d have realised that this house (and book) was an extremely blasphemous one. So how did he arrive at the conclusion that we’d have any regard for his revered “black man”? From his tone you could discern that when he said “black man” he didn’t merely mean that I (presumably) have a dick and a healthy dose of melanin. For him “black man” seemed to be some delicate deity whose fragile integrity we ought to be careful not to desecrate. He seemed to not give a fuck that we did not give a fuck. One wonders when he was reading all this psychoanalytical mumbo-jumbo did he not at least come across Fanon’s “To us, the man who adores the Negro is as “sick” as the man who abominates him.”? I mean c’mon! even the woke kids with their famed bibliophobia at least read the preface and introduction.

He almost ruined my Wololo literature night. It was so fitting that the first time I did a public reading of this kwaitofied piece of exquisite literature was at a club on a Friday night on Second Avenue – the party capital of Bloemfontein. Who the fuck said literature only belongs in libraries and lecture halls? The image Ngugi painted in my head about his books being read communally in taverns has haunted me for a long time. Now it is becoming my reality. I think my handling of this situation bodes well with my ministry to ward off philistinism in this our beloved city – here we go to clubs to read, discuss, laugh, sing, drink, dance and generally have a ratchet good time because #ArtLivesHere.