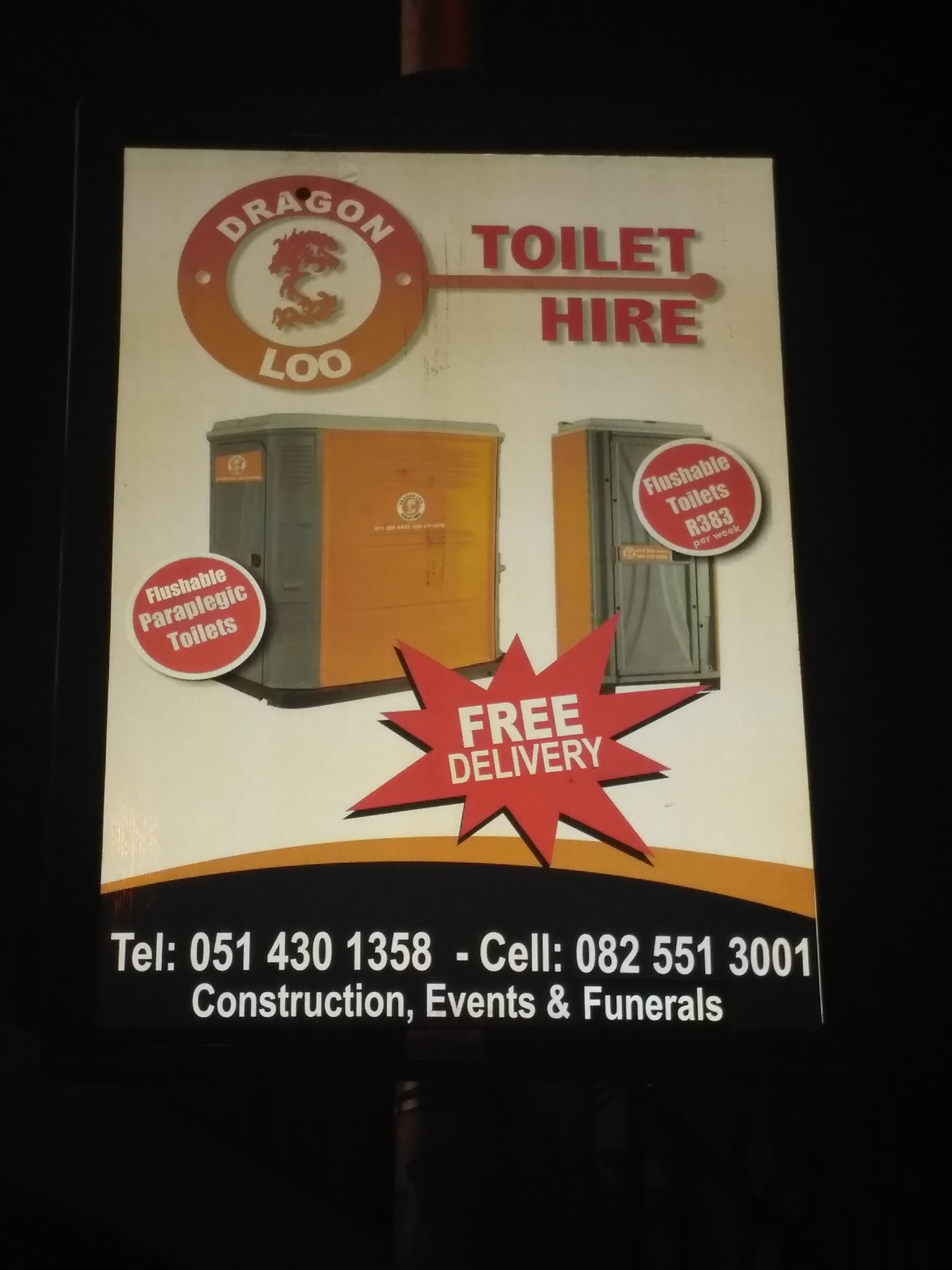 Of course our lives are not so banal as to keep churning out the same devilry on our nocturnal walks. No; far from it. In fact, one could point to innumerable occasions where walking was a safe, uneventful exercise. The latter criterion however we cannot meet on the occasion of this past Saturday; hence the need to put finger to keyboard (the woke ones with their masochist nostalgia for “real” suffering would prefer the phrase ‘pen to paper’). The event concerns a godly billboard I encountered on First Avenue this past Saturday. From a company called Dragon Loo Toilet Hire. Finally, I had found the words to exalt my god: Dragon Loo!

I am often mistaken for a better black; a woke one at that. I was cursed from childhood; my staple music diet was the Jazz Ministers and the likes. Zandile – a song by those lovely sentient beings – hasn’t a single word to it. Yet I know its lyrics from the first verse to the last. For in the beginning there was the Word; and the Word was God. And we blacks – cursed beings we are – have always mastered the Word. Yes, I dare say it: we birthed God! We are kings unto Him. So it is no surprise that I found words to Zandile. And to many other canvasses as well. I am thinking here Winston’s “Masihambe”. That one turned into a gospel song; a prayer I recited each time anything (especially church) was taking too long. All of this has taken me away, somewhat, from the broad masses of our people. People I love so dearly. It thus pains me that, for the past six years, we haven’t been able to spend our happier times together.

Unlike them; I am not a music snob – I am not at all against listening to music I find uninteresting or downright trap; oh sorry I meant crap. Same difference really. In fact, given that those who have usurped themselves the slippery perch of thought leaders on a platform mainly used by an inconsequential one percent of the populace have found it fit to declare that #HoeIsLife, I can unashamedly admit to being a whore of music. Where it leads me I will follow. I mean for god’s sake I even go to church for the music! So what would prevent me from being with the broad masses of our people when they gather to worship under the spell of the mainly unseen but omnipotent gods with one ear covered by headphones pressing on buttons without any effect on the loud music barring recklessly from the huge speakers that were seemingly built to reach heaven for the attention of God’s big deaf ears (no wonder then the Pentecostal churches are never without these speakers; and no wonder their prayers receive more likes and retweets from the man upstairs than those of our poor spinning and drum-bashing churches in the ghettoes with whitehead Bishops who don’t even own a bicycle while the 20something year-old Pastor is on his fourth AMG – oh maigot!).

You see, (why do poets like this phrase so much? It’s almost as if every stanza starts with this phrase, followed of course by the all-time favourite word: “I”. Fucken narcissists! Go get a bloody diary and phumakithi!). You see, I, unlike Bukowski, believe that all dumps are important to a young man’s life, not just the long beer-induced one in the morning. I give here special attention to those dumps that just sneak up on you unawares, in the most awkward of places. Those, I posit, are the dumps that gave birth to the “oh shit!” aphorism. You’re at your new bae’s birth home, to meet those responsible for their hang-ups and the main reason for the impending implosion of the cursed relationship (even if this responsibility only stretches to them fucking and conceiving that toenail of Satan – which in all honesty is rarely ever the case, but let’s leave that gossip to Sigmund Freud). You’re having a mighty good time impressing these supposedly nice people (we all know that they’re horrible old hags waiting for you to fuck up) when suddenly there’s stirring in your bowels (you have been too focused on ensuring there’s no stirring in your loins should a hotter sibling appear, your body forgot to govern other areas) and you feel a golden brown rush toward your anus: “Oh shit!” Or you are in a middle of a lie to high school kids about the importance of hard work, or R4,500 paying registered ‘hustlers’ to your weekend-long Forex workshop, (same naïve fucks; different LSM), when you realise that the next exaggerated ‘walk like a boss’ step on your kick-and-boboza shoes will result in soiling your white linen pants recommended by your mentor for their translucence as it signals transparency and honesty: “Oh shit!”

Now imagine my entire self, the provocateur and general insultist I am, with an unsuspecting interlocutor-turned-intellectual punching bag on the ropes, and, unlike Helen Zille’s racist tweets, “surprise surprise…a dump is upon you.” Oh shit! I would, in the normal course of business, have to cease and desist my hearty derisive laughter at my victim’s pathetic attempts at a counter-argument. That is the first important step, laughter has a tendency to loosen the bowels. Hence people with no humour are so full of shit. The second step would be to announce to my audience – because in reality I’d have been carrying on this charade with this idiot for their sake – that I’d rather go take a shit than stomach the shit coming from the said idiot’s mouth. This is another important step; as I have to always control the narrative about myself – in this case I cannot admit to a dump imposing itself on me, that is counter my narrative as an existentialist, hence I frame the whole affair as an act of agency on my part. The third and last step, is to find the nearest, cleanest toilet to relief myself while retweeting some woke quotes.

Mahungra, however, where the broad masses of my people gather, is no business as usual. The place – all half-hectare of it – is bereft of toilets. Not a single one on site! Let’s go back to the situation as above – let’s add, for effect, that I have engaged as many shots of cognac as I have schools of thought that night. Now, I have just successfully completed the second step and convinced everyone that the impending dump is completely dependent on my whims. I am hit by a serious obstacle; there are no toilets on the property I am patroning. The nearest toilet is at the BP garage; I would need some coins to use it, and also observe the first commandment of black life under the ANC: “Thou shall queue.” Together with the few ladies who decided that they were above squatting and squirting in the bush. There are two main problems with this scenario: firstly, it is entirely possible that neither me nor any of my companions would have cash on them; being civilized people of NFC and all. Secondly being on the queue will definitely give away my ‘number two’ dilemma to a lot of eyes I cannot sate with my lie of picking this shit over the one spewing from my interlocutor’s mouth. And to compound matters further, the fact of me subjecting myself to a queue would give me away to people who know me well enough to know that I would never do such unless there were extorting circumstances. Which would of course make piss of all the work put in into step number two. The other option, the Shell garage across the highway, has the same two problems as the first option but to its favour has less eyes – however it carries with it the risk (especially given the cognac cursing through my veins) of being trampled over by a truck. Nna nka se shwelle masepa.

It is clear to see that the above scenario is an “oh shit!” moment only surpassed by relieving yourself of putrid green slimy mess at your potential future in-laws during water-restriction hours (and being the landless blacks they are, the toilet is probably within earshot and eyesight of the masses dining from their laps in the lounge – how are you to clandestinely sneak in buckets of water from the bathtub next door? Nee mahn!).

This is the only reason that propaganda has been able to thrive on my name: “heh heh Mpho is a snob?” the slob I am? “heh heh Mpho is a coconut” I can barely pronounce the word pronounce – coz rolling R game dololo! “heh heh Mpho is a better black” I too know the struggle of being grateful for food; I’m just very much anti-poverty-porn. I am not about to masochistically parade my pain for the world to pity for the sake of relevance.

But all of this is about to come to an end – thanks to my (together with especially female Mahungra patrons in jumpsuits and any woman wishing away the indignity of subjecting their holy of holies to the risk of bush snake bites) Lord & Saviour: Dragon Loo. I was awed to the floor by the poster with the orange portable toilets. Even their colour was perfect for Mahungra as Mangaung’s prime party destination. Orange is after all the city’s official colour. And its brightness lends it visibility in the dark even to alcohol-compromised eyes. As if this isn’t enough good news; they also offer free delivery, that means no one ought to lift the finger to install nor rid the thing of our collective shame – the lazy buggers we are. But what finally convinced me that this was Jesus’ personal answer to my prayers was the cost of it all. Being ultra-concerned about the profitability and sustainability of black business, I was worried that such a venture for the sake of our fragile oft-ignored dignity would cost these entrepreneurs who saw a gap in the highway…uhm, I mean market…who saw a gap in the market an arm, leg and trip to Saxonworld Shebeen. But no, when eloah Dragon Loo still reigns ha a yo mathata: our dignity will only cost our business geniuses just less than ten of their (sometimes) diarrhoea inducing beef stew plates per week.

Maigot! This is a win-win for everybody. Especially me – which is of course a more interesting development. Soon I will be able to Wololo with my people – or rather, if we are in the business of being honest with each other, hating on my people Wololo-ing. But those are just semantics; oksalayo I will be with the broad masses of my people. When they’re at their happiest. And nothing makes me happier than that. Except of course Jazz. And being alone. And drinking coffee. And writing. And loving a woman. And reading Kundera. And…ohk; let’s just say being with multitudes people in the bush next to a highway listening to Emtee’s “trapa trapa babaye” does not necessarily amount to the pain of landlessness, and thus somewhat tolerable. You see I – in the black tradition of begging for crumbs – only pray that they make it a bit slightly more tolerable by having ablution facilities on site. And Dragon Loo (what a kak name!) gives us an easy way out; and that’s all one requires from a deity. An easy way out. Hence I exalt it so. It’s probably not even worth shit, as are many businesses with ads with a star pop-up banners with tilted words inside, and many gods. But what more can we ask for? Like all black people I birthed a shitty god with my words. For that I have nothing to say but “oh shit!”

This is really an awkward way to end a piece, quite shitty in fact. But it is what it is. Lemme go take a dump.