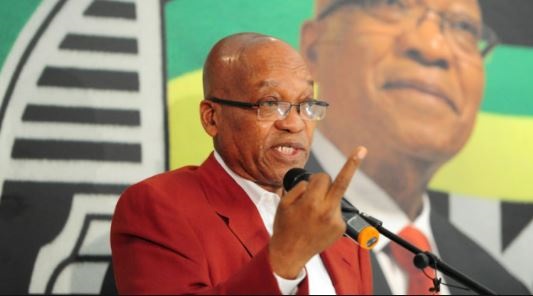 Great literature not only captivates but also allows us to go off on a tangent; it acts as a worthy launching pad to our own thoughts and ideas. None is worthier than Ace Moloi’s and Thato Rossouw’s beautiful dance on the latter’s essay, “FIVE FUCKS OR LESS: On Jacob Zuma And Learning How Not To Give A Fuck” available for sale on Kobo. Because nna ha ke rate ho hlolwa, lemme take off my heels ke kene circle-eng.

In reading Ace Moloi’s brilliant reading of Thato Rossouw’s “fuckeristic” essay, one such a tangent I find myself lost in is President Zuma. One might think this is odd as the essay is – as the subtitle suggests – about him. But not at all – the essay is a brilliant irreverent expose on the state of psychological health of black folk; that our lives are so mired in disaster that it becomes imperative for our health that we pick and choose rather carefully what to give a fuck about. I think President Zuma captured this well in his birthday address when he said for all the fifty-plus years he’s been active in politics he has been called so many things that it now matters very little – if at all – what people say about him. In parliament too during the QandA he was quick to dismiss hearsay arguments and indeed was very patient in asking his detractors to provide empirical evidence. At every turn he pointed to his party’s election victories as all the evidence he needed to know they were on the right path, that – he insisted – was the only objective test available. No one can fault his logic here.

But I went in there too quickly. The first point I need to make is that in as much as the name Jacob Zuma is in the subtitle, the essay has got fuck all to do with the President. But rather hinges on South Africa’s favourite bogeyman-scapegoat: “The Zuma”. We all know this mythical entity: it has a marauding phallus that can’t even stay clear of Father (or is it Mascot) of the Nation’s rectum, it plays yoyo with the Rand, it is handled from Saxonworld, it gives zero fucks as Thato brilliantly demonstrates in the essay, and per Moloi (and Maimane) it is broken. It is the latter faux pas I wish to ponder on. But first a ke ale phate:

Ka mathata e le mawelana, there are two tragedies with the bogeyman-scapegoat “The Zuma” inherent in all such entities. The first and most painful to me as an aspirant public intellectual is that any uncouth idiot who espouses an anti-Zuma sentiment is parachuted as a thought leader in the (rapidly – thank god! – shrinking) mass media. “The Zuma” bogeyman is a rich mine for any dilettante to wax on lyrically about ethics, governance and even realpolitik. We have finally reached “the age of universal deafness and incomprehension” that Kundera foretold. Except that things are much worse; not only does “everyone wake up as a writer”, but a thought leader too. Your ticket; “The Zuma.”

The second tragedy is that, obviously, “The Zuma” will die – and like all sacrificial lambs its blood will cleanse us of all our sins (and his own). We already see how it has already cleaned Ramaphosa off the blood of the Marikana miners. Mcebesi Jonas is one of those whose sins have been rendered white as snow by the saving blood of “The Zuma”. The ANC – as many inside and outside are already calling – will be the next beneficiary of this cleansing. Twenty-three years of anti-black rule will be forgiven as soon as “The Zuma” of Nkandla is impeached and arrested. Today even the existence of white monopoly capital is up for debate because the whole thing could just be the fault of “The Zuma”. This is the greatest thing that has ever happened to both White Supremacy and the ANC – blame it all on “The Zuma” and guarantee yourself another few decades of fuckery. “The Mandela” mascot no longer has any effect on us; the baton has been handed over to “The Zuma” bogeyman-scapegoat. Added to this is the paradox that if Zuma is guilty of everything; then he is guilty for nothing. We cannot even hold him accountable because the case has been tainted.

Now to the point of this tangent – I wish to object to Moloi’s objection to Rossouw’s “choice of a hero in nonfuckerism: President Jacob Zuma.” It is the reasons behind his objection that I wish to take exception to, not the objection itself. If pressed I’d object to Zuma as the prime example of “nonfuckerism” on the basis that it’s too easy as “The Zuma” is already fair game as illustrated above, and I know Thato to be a talented enough thinker to slot anyone in that hero role and mindfuck us to no end – the fuckboy he is. Ace contends that – because in his foreword to “Five Fucks Or Less” he does this brilliant thing of turning the whole “don’t give a fuck” phenomenon on an entirely different axis, bordering on Christian and motivational philosophies – Jacob Zuma is an unlikely hero in this august ministry of nonfuckerism. “Not all that doesn’t give a fuck is heroic.” He brilliantly puts it. Granted. But why not Zuma? Ace is never short of answers, he castigates Rossouw for “the omission to distinguish between a broken man and a man who refuses to be nervous in the face of opposition and confusion.”

Now before I get into that lemme nit-pick and take another digression on this notion that President Zuma is a “broken man.” I extend further to include Maimane’s caveat – a silly own goal really – that the president is “a broken man in a broken society.” Of course history has already recorded that President Zuma (rightly so) made a mockery of this asinine attack. But my main ask is a simple one; if the society is broken, who else must preside over it but a broken person? I echo the words of my comrade Luyolo Busakwe when he says “I am from a godless culture of politics” – that is to say I do not expect any more from those presiding over society than I expect from society; I care neither for demigods nor heroes. I guess this is where mine and Moloi’s kitsch differs. If indeed we are a broken society I cannot find fault with one broken man. To expect anything more of him would prove that Andile Mngxitama was right eons ago when he said that we are all involved in a diabolical scheme of president abuse. We are a broken society; we deserve a broken president! Was it not Zizek who said only a suffering god can save us? Sihole Msholozi!

“The (broken) Zuma” has already confessed and history confirms that for more than half a century he has faced “opposition and confusion”, he’s had no recourse but to not be nervous. This ipso facto turns him into the “hero in nonfuckerism” Moloi asserts he is not.

Another danger that lies in this “broken man” narrative is that it risks absolving Zuma of his myriad of crimes – and here I am talking serious things not petty issues of 700+ charges and Nkandla. Top of that list will of course be the charge of being the President. We add to that Fezekile Kuzwayo, Marikana, and the ANC’s two-decade long anti-black rule. How do we ask a “broken man” to account on why he didn’t protect Fezekile (and black women in general) from Malema et al’s rape-culture enabling vitriol? Or why his government has failed to deliver a fatal blow to white monopoly capital by taking back the land?

I prefer Rossouw’s “heavyweight champion of no-fucks-given, the Honourable Jacob Gedleyihlekisa Zuma” over the broken bogeyman-scapegoat one. Because the former is an entity with agency I can battle with; whereas the latter is something to be pitied or hated. But anyway, who gives a fuck?