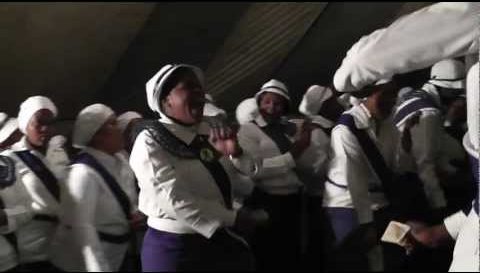 Two am. We all had a bit of wine – oops! I mean the blood of Jesus. His body too; just for control. The hymn – #211 Sioneng – sung during the three hour-long Holy Communion service. Actually just one verse of the hymn is sung. Slowly, deliberately, I daresay lethargically.

There will be a group of dedicated singers who will stay the cause – ensuring that the song doesn’t die out. It is mostly the young women, Barwetsana. Looking all sorts of beautiful in their blue skirts, white blouse, white-trimmed blue sash, blue knitted shoulder club with elaborate patterns, a white bucket hat with a silky blue ribbon.

The few men joining in would in most cases be an inspired priest or two, newly graduated evangelists with their perfect blue new capes. The healer initiates – especially those whose calling is song; or for whom song quells their demons – will also join in; their blue capes will have a red or yellow inside lining instead of the usual white.

It will be an animated group of no more than fifty in a congregation of thousands. They will gather right up front by the altar. There will be an elder woman at all times keeping guard that their much-appreciated efforts of keeping the song going don’t become too lively – Holy Communion is a solemn activity afterall. It’s a hymn of self-reflection and immense gratitude:

But – to be crude – it is boring as hell! The rest of the congregation will meander in and out of the church. Some might take a nap. More especially those who are not yet baptised and therefore can’t partake in Holy Communion. Some just don’t feel they’re worthy – that their hearts are not clean enough to accept the blood and body of Christ. So all of these people have no interests in the ritual. They are also joined by those who’ve already had their turn at this cannibalistic ritual.

Soon enough the church is half-empty. By the time the last cohort goes to receive Christ, only the group of fifty is active. Everyone else is a little more than a zombie. Holy Communion ends. Amen is chanted. Prayers to put a lid on it are offered.

This is when the talents of the MC are tested. He’d get up to the pulpit.

Feeble responses of “amen” march ever so slowly towards him. He is unfazed.

He disappears behind the pulpit as he takes the knee, very few are able to mimic his enthusiasm and merely bow their heads in prayer.

When he gets up – he is not much of a singer – he chants in measured staccato while tapping on the pulpit to keep rhythm: “MA-TLA SO-NA KE BO-PHE-LO.” [His interpreter picks up the handbell – CLICK-CLOCK CLICK-CLOCK]. They prod along sadly like this for a few seconds until an alto emerges from the G50 faction and puts some pace to the song. MATL’A SONA KE BOPHELO!

The chorus picks up, the group is gelling again. It all comes together with a chorus. The tenor wrestles it from the alto an leads it. MATL’A SONA! MATLA SONA! It’s becoming a party now. The soprano won’t be defeated – THALALALALA! THALALALALA! THILALILE! Only the baritone is behaved and settles itself as the canvass upon which all these flowers bloom. But once a while burst buoyantly from the background. MATL’A SONA! But quickly retreat.

The G50 are now leaders – not the sole choir. Many have joined in the festivities. But the MC is not satisfied. There are still too many empty chairs. Still too many people sleeping. He says a quick silent prayer and leaves the pulpit and goes back to his chair. The song still rages on. Many are starting to flock in. His navy blue velvet gown is too heavy. He takes off the sash, unbuttons the gown and takes it off, places it on his chair, puts the sash over his white coat. Back to the pulpit. Grabs the mic and the other handbell to join his interpreter in furiously ringing it.

“KENANG MOKETENG!” [Ngena mgidini!] He bellows through the speakers. He then steps off the pulpit and starts walking the crowd. His interpreter duly follows. Both of them with mic and clockbell in hand. A cortège of priests follow them as they go around commanding people out of their slumber.

“Bophelo bo ka tempeleng. Matla a sona a bonwa mona. KENANG MOKETENG!” The message reaches a particular bloke outside from Rustenburg and the lady from Kwa-Duduza who just made each other’s acquaintances. The share an esoteric smile and check if their uniforms aren’t too ruined from the hugging, then rush back inside. She’s surprised to hear that he’s a soprano despite his rugged speaking voice.

“Ba se kenang ka tumelo, ba tswa teng ba fodile! Tlong le tlo bona pholo! KENANG MOKETENG!” There’s a shebeen a stone’s throw away from the church – the speakers reach there, as did the brass band boys and girls after they opened the ceremony four hours ago. A few expletives have been thrown around, a few fists exchanged in the merriment of the devils piss – a few bodily fluids too, maybe some viruses as well. And surely what may later be presented to the maternal grandparents as a miraculous conception. The father having issued the clarion call “andizi”.

Some among them will scurry and heed to the call.

“He ntja lebanta laka le kae?” One will ask in panic, the others having left him. You’re holding it! He’ll be laughed off derisively. He gets up a bit too quickly – shoots up really. His walk is staggered – his comrades already spot danger. He is too drunk to go anywhere near the temple. They pull him down and tell him he’s going nowhere. Sobbing he starts to sing along in impeccable tenor, “matl’a sona ke bophelo”. The whole shebeen joins in.

“Baetsadibe ba batsho, binang ‘pina tsa topollo. KENANG MOKETENG!” The voice of the MC bellows from the speakers as he heads back to the pulpit a happy man, the temple is packed to capacity. The Holy Feast is back in full swing. The hymn – #89 Sioneng – (rather the one line thereof) has been sung for a solid thirty minutes. Each minute a steep elevation from the last. And here Barorisi Ba Morena capture the moment succinctly. A perfect rendition!